ROSA Bugzilla is located at http://bugs.rosalinux.ru/. The main purpose of this site is to serve as a central point of contact with distribution maintainers and developers about the problems in the ROSA Desktop distributions.

To file bugs there, you should "register" at Bugzilla itself, ABF credentials won't work.

What issues are tracked in ROSA Bugzilla?

How to report a bug

The ROSA Bugzilla, though it has some specific tweaks, is just a usual bugzilla. The interface is most likely familliar to you: if you saw one issue tracker then you've seen them all.

After that, just click "New", select a product you wish to report bug (most likely, it will be "ROSA Linux")[1]. Specify the category you want to report the bug against; if unsure, select "Main Packages". When you report a bug, you should specify a package you have problems with; the bug filing form contains instructions on how to obtain this information. This information is used to determine the person responsible for fixing the bug[2]. Fill all the fields in the form, following the instructions listed nearby.

If you think your bug is sensitive, read this section.

How to propose a feature

To propose a feature, open a new Bugzilla ticket in "Features" product. The feature will be reviewed by developers as soon as possible, and it will be decided if it's worth allocating resources at, or if the feature fits the overall concept of ROSA Desktop. Make sure you have searched for similar features (or reviewed the list of all features) because your proposal might have already been reviewed.

If the feature is so sensitive to ROSA business that it should be kept secret from the broad audience, select "ROSA employees" group restriction at the bottom of the bug.

See #Useful links for the list of feature-related queries.

Bugzilla has an advanced bug search and filter mechanism, though it's not easy to use. I gathered some useful search queries here:

If your issue is sensitive because

you should click "ROSA Employees" checkbox at the bottom of the bug file form. This will make the bug visible to you and ROSA employees only.[3]

Warning! If you forget to set this checkbox, the bug comment will automatically be disseminated through a public mailing list, and you can't cancel it later. Please, be careful with this.

If you need greater security, contact admins; see #What to do if there's a problem with the Bugzilla.

There is no way to edit a comment in Bugzilla once it has been published. Post a new one instead.

Bugzilla comments are used to track the whole history of the work made on a bug. Editing a comment might also affect the responses to it, and whether an update was approved/rejected. That's why we would turn off the ability to edit comments even if it was present in the stock Bugzilla. 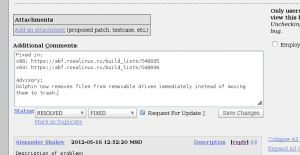 "Request for Update" checkbox
ROSA Bugzilla has a number of tweaks that aid us in the development process of ROSA linux distribution. Here's a list of them. 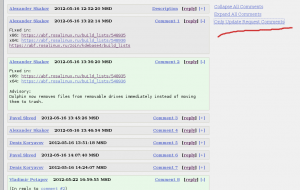 Filtered comment stream
The process of updating a released ROSA Linux distribution is built on top of Bugzilla. You can read more in Requesting an Update policy. An interface of bugzilla was extended with a "Request for Update" checkbox. The value of this checkbox denotes whether this bug is also an update request. The checkbox also helps you to fulfill the requirements of the Requesting an Update policy by disabling itself if your comment doesn't have enough information.

When you set this checkbox, the QA (or some other party your update had issues with, Security team, for instance) is notified about the change, and will process your update in a timely manner. By changing the checkbox state and committing your change you may notify QA if the package is ready (if you set the checkbox), or cancel the request (if you unset the checkbox).

To aid QA teams in reading the bug comments efficiently, we added a filter that expands only update-related comments. These are comments that contain the keyword "advisory" or a link to ABF build list. To use the filter, you must have Javascript enabled in your browser. 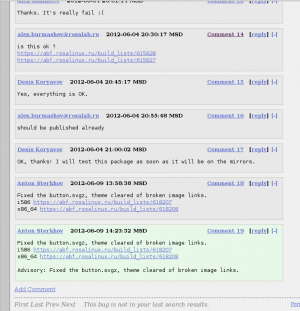 Comments that may be related to update requests are highlighted with a greener color, so they can be identified easier in a (possibly) long comment stream. See the screenshot for an example.

Please, note that this only works with the default "Dusk" theme!

Some transitions in the process of update verification are too common to make the team members make many clicks during common operations. Some buttons were added that use Javascript to switch flags and statuses after a QA, secteam or repo-man have worked on the package.

Note that these buttons do not save changes, they just switch the status. To save the changes you should click "Save Changes" and write a comment!

Only buttons relevant to a specific team are displayed. The screenshot to the right is just an illustration that gathers them all in a single screen. 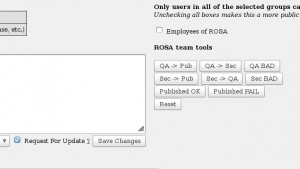 ROSA Desktop products have "ISO-related" checkbox. The flag should be used by release-managers to mark bugs they will look through when assembling an ISO. As soon as the bug is fixed in ISO, this flag may be removed.

Here is a query to list all bugs with this checkbox set.

What to do if there's a problem with the Bugzilla

If you have successfully obtained an account, and want to report a broken link, or a problem with Bugzilla functionality, or want to ask for specific permissions, please, open a bug in "Bugzilla" component of "Websites" product.

You may also directly contact bugzilla admins, but we prefer that all requests are directed to the bugzilla itself as described above.

If you have problems with accessing bugzilla[4], or wonder what e-mail and password to use, please, refer here.